I have spent the last four months living and breathing you. You have been the inspiration for songs, and blog posts and endless tweets ... and even though you pretended not to know you were my muse, I'm sure you did. I didn't realise how used to having you in my heart every day I had got, until it ended so recently and so suddenly.

I guess I should've known really shouldn't I? That as soon as I got comfortable with how we were, and the way we seemed to be moving - and even wrote a post about it - then things would change. That is how life goes for me.  You'd think after 40 years I'd come to expect it, but I really didn't see it coming, not like this.

You turned up at my 40th birthday party in the foulest mood I've seen you in, and did little to hide it. You even sodded off for a couple of hours to go and get yourself something to eat elsewhere. You came across like the stereotypical prima donna musician. You were rude to my friends and family, you were offhand with your own friends and I genuinely wish you'd just said to me:
"Look ATOmum, I've got some stuff going on, really not in the mood for this, I'm going to go and I'll come back at the end for the amp and the mic, have a lovely time".
But you didn't. And so the friends and family that I had sung your praises to, who met you for the first time that night were left with the impression that at 40 years old I still didn't know the difference between a good man and an arsehole.
You hung around like a miserable git, didn't even want to give me a lift home even though there was no other way of getting me there, and then you sat there in my living room still miserable and offhand with me, and only slightly less so with our friends who'd come back to. At the time I was just about too drunk to notice or care, but looking back now, it kills me. I enjoyed my party despite you, but still, if there's an opposite of the cherry on a cake then you were it.

I did carry out my plan, and suggest to the man, that after a second night sleeping in my bed, arms wrapped around me, that perhaps, before we got up, he should at least kiss me. (I didn't ask him the night before, apparently I opted for having a drunken rant about something and then passing out on him - attractive huh?) He laughed, and I didn't say anything.
He joked that I was being pushy again (hardly pushy really given the situation eh?), and that I was "messing with his karma" - which I think is closer to the real reason. Then he gave me a peck on the cheek, and I grabbed him and said "that's not a proper kiss" and he gave me a quick peck on the lips and said "That's all you're getting!"... and off he went downstairs. And still, thinking about it now, I didn't get the sense that he meant 'ever'.... but who knows?

Anyway, I got up, joined him, and we spent what was left of the afternoon chatting, sorting out his business stuff, just as relaxed with each other as we always are, and then I went to pick up the kids. When I got back he was there in the kitchen, cooking tea for all of us. Which was, of course, lovely. The kids love having him around.. and so do I.

What happened after that? Well, before he left, he talked about coming back to stay a couple of days later - he had to be in our town the following day for an appointment so it kind of made sense. In the end he didn't - he had to get back for his dog that was staying with him as his ex was away for the week - but the fact that he planned to come back, and the fact that when I asked him if he was, he gave me a straight answer, those things are kind of new.

Since then, we've been much closer - he's hardly being evasive at all when I speak to him!!  When I saw him at the next Open Mic night we arranged him bringing the music equipment for my birthday party and he said: "I'm probably going to be really drunk, I'm staying at yours that night, right?", and planning that in advance is definitely new! As it turns out, he's not, as he now has to work the next day, and his friend needed a lift. The point is though, that these are now the kind of conversations we can have, and every time I see him, he's always talking about the next time he's going to see me. Okay, there's always some other reason than just wanting to spend time with me - business stuff, or recording tracks for me - but maybe that's how he needs it to be right now...for whatever reason.

So I guess, technically we're still 'just friends', and there is some reason that he's not ready to make it more physical.. yet.. and I'm still not 100% certain what that is - because it genuinely doesn't feel like he doesn't fancy me at all. The important thing for me as that it feels different, it feels like we've moved on.

And then on Sunday after the Open Mic, when everyone had gone, he walked me to my car and hugged me goodbye, and he said - for the first time - not just "Goodbye", but "Lots of love"

What it feels like, for want of a better way of putting it, is that we're on a journey, and we do seem to be moving closer together, and while I still have no real clue where this particular ride is going to take me, I am enjoying it. I get to spend a whole load of time with a gorgeous, fascinating, clever, talented guy who cares about me, makes me laugh, respects me, supports and encourages me, loves it when I talk passionately about the things I care about, gets on great with my kids, and cooks amazingly! That can't be such a bad thing can it?

How my children see me meme... at last!

So I was tagged ages ago by the lovely AMummysview in this meme, and its taken me forever to get round to doing it - but at last here it is, how my children see me 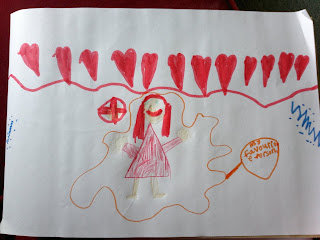 He said that the blue bits at the edges were for when I get cross, and the red cross is actually a kiss for me... bless him. 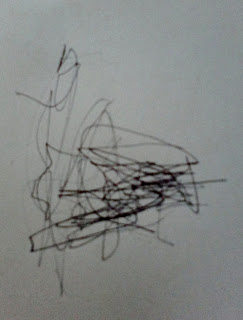 .. apparently the bit at the top is my eyes and the big squiggle to the right is my knees and my legs... guess I'm sitting down!

I have no idea what those say about me, but I'd love to see how these lovely blogger's children see them:

... looking forward to it already!!