Festive excretions... not to be read by the squeamish! 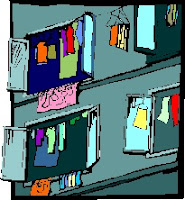 <best tannoy voice>
"We apologise for the interruption in your blogging service, but your blogger has been unavoidably detained by tending to the consequences of a variety of bodily excretions"

There's nothing like clearing vomit covered sheets and soiled pyjama bottoms to make you feel extra Christmassy is there?!

Now I don't normally do recipes, for reasons that are about to become obvious, but I was so proud of this one I thought I'd share. To put this in context, I specialise in meals that are ready in five minutes - largely because I'm so disorganised I often have very hungry children before I've even thought about what to feed them. So, here is my... 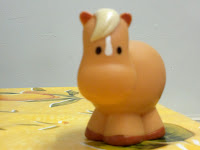 I thought this was pretty tasty for a five minute meal - and had my protein, carbohydrate and vegetable bases covered. DS2 however decided to feed it to this:


He tucked 'Horsey's' head over the edge of the bowl and made lip smacking noises. I tried suggesting that Horsey might like it more if he ate some too, and he did walk horsey away and then take a mouthful, so I was hopeful. After the first taste though, he just pushed it all back out again with his tongue, laughing, and then walked Horsey back to the bowl. (While that might not seem the best recommendation for my recipe, he does, in fairness do this with anything made with rice, so I don't actually know why I bothered in the first place.)

How do you explain to someone pre-verbal that tea is for him and not plastic horsey? Any thoughts?

Email ThisBlogThis!Share to TwitterShare to FacebookShare to Pinterest
Labels: cooking

I think DS1 should win the prize for 'most token part ever given to a child in a nativity'. He was Herod's servant, which involved walking on with the three wise men, opening an imaginary door for them, and walking off again. They all watched him leave, somewhat bemused, and then got back to the scene. It was unintentionally highly comical, not least because of the seriousness with which DS1 took it. Fortunately DS1 didn't realise, and has so far not noticed the camera shake on my video footage, caused by me suppressing the urge to giggle.

Name dropping to myself on a Lucozade high...

The problem with drinking Lucozade late at night, when your mind is still spinning from a run in with an arse of a headmaster, is that your brain ends up trying to distract you at 3am by going through a list of famous people you have known.

Or perhaps that is just me.

I think it was the Lucozade anyway.

An Oxbridge education and a short career in stand up has meant that watching panel shows for me is like watching a parade of people I once knew a bit. I mean, imagine if a whole load of people you vaguely knew at some earlier point in your life just moved into your living room. It is freaky. I've sort of got used to it over the years though. At this very moment I've got an ex on BBC3, someone I once shared a stage with on BBC2 and a friend of a friend hanging out on ITV.