The Magic show, the headmaster and the unfortunate phone incident 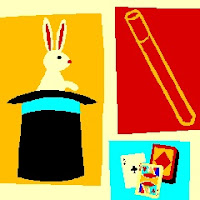 It's all been about DS1s school talent show in our house for the last two weeks. My work days have gone out of the window in a frenzy of magic show prop making - our house looks like a slightly crapper version of the Blue Peter studio with the endless bits of cardboard boxes, white paper and prittstick littering the place.

DS1 has paid little interest in this frenzy I have to say. It's only because I suddenly realised that all his tricks - out of the magic set his Dad got him for Christmas - were just too tiny for a big audience to see, so I had to do something. I was wondering if I was just being 'competitive mum' - and of course I am a bit - but mainly it was that I didn't want him to have to experience of an audience reaction to him mumbling over a table of small objects for five minutes. Could have been deadly.

It was only when we got to school yesterday to practise for the first time I discovered they'd already thought of that. There was a microphone and a 'visualiser' (a camera attached to a computer, which projected onto a screen - see why they went with the one word then) so he could be seen and heard. Not the perfect set up but it did work a bit.

So, in theory, I needn't have bothered with making a final trick big enough for everyone to see and join in with. However, then I wouldn't have had the fun of watching DS1s headmaster stand up and shout something stupid at the top of his voice in front of parents and peers - which is how the final trick ends.

Some might say I engineered the entire thing just to humiliate said headmaster -  I couldn't possibly comment...  other than to say that if he will sit and patronise me for three-quarters of an hour when I dare to suggest that perhaps DS1 isn't being challenged to his full capacity, then he deserves everything that's coming. And if I had my way entirely, he'd be shouting 'twat' or 'idiot', but I fear that might be a bit much for DS1s delicate ears.


You may have gathered the meeting with the school to try to get DS1 some appropriately challenging work did not go well. Said headmaster spent ages explaining to me how they differentiated by task and outcome, in a way that, despite my best efforts did not brook interruption. Had I been able to interrupt I might have said, 'Yes I know, and even if I didn't before, you told me last time, now can we get to the point?'

He then  showed me other kids work so I could see that what DS1 was doing was different - how wrong is that?? Even if it weren't, just because what DS1 does is different doesn't mean its appropriate to what he can do. He also insisted on showing me lots of English work, which was not what I had a problem with - although after having seen it I do now! The only maths he showed me was dated after I'd e-mailed him to request the meeting - which was confirmed by one of DS1s classmates going home and saying to her mum "Why is DS1 getting different maths sheets to us now?". I did look at that and feel quite sorry for him - I thought "Are you really so naive that you've not noticed that DS1s teacher has clearly only just started differentiating work, while telling you she's been doing it all along?" Then I remembered all the patronising I'd just sat through and all sympathy evaporated.

I just hate being patronised by people who are clearly stupid. Mind you, maybe only stupid people do talk down to other people, anyone with an ounce of intelligence realises that a/it's rude and b/they may not be fully aware of everything this other person knows. So essentially the meeting was left with him saying 'We are differentiating enough' and me still having a bored child - so that was worth the effort then.

However, DS1 is carrying on the good fight - they did their pupil consultations for the reports yesterday - in response to what he liked he wrote 'I like Nature Club' (extra curricular activity), and in response to what would you like to be different he wrote 'I would like harder work' - Good lad!! (I was not even in the same town, so they can't put that down to pushy parenting!!)

Back to the talent show though, the rehearsal process has been tortuous - trying to get DS1 to understand that he needs to explain the trick for it to work and do all the patter in between, otherwise no one will know what's going on. The problem is once he knows a trick he forgets that stuff and just gets through it as quickly as he can. Yesterday, I was trying to explain to him that he needed to have fun, so the audience would enjoy it and he said to me 'But it's really hard work Mummy' - cue long explanation from me (performance is part of my job) about all performing being hard work but a performers job was to make it look fun. So at least if he does decide to pursue his current ambition to be an actor he won't have any illusions - and it gave him a whole new respect for the acts he saw on TV.

Talking of which, we have been glued to Got to Dance and very sad it has finished, although watching the dress rehearsal of the talent show today I can't help feeling that the street dancer who chucked himself on the floor (and Chuck was his name as I recall) has got a lot to answer for. The two street dance acts involved a lot of what seemed like deliberately painful looking landings - either that or they were just very good at making mistakes look meant - I suspect it was the former. Still, DS1s magic act went well and the audience erupted at the final trick so DS1 was very happy. He started his act mumbling, but as soon as they started clapping every trick he got really confidence - obviously an applause junkie then, just what I need!

My realisation for the day however was when showing DS1 and his fellow Year 1 performers (three very sweet little girls) a text from his Dad wishing him good luck just before the show. It was only as I was reading it out to them that I realised his Dad is still saved in my phone under 'Git'. I don't think they noticed, but I may be in trouble if they did - they run up to me in the playground and say 'Hello ATOmum!' so I just have images of them running up to the ex when he drops DS1 off saying 'Hello Git!' - not sure how I'd explain that....
at 13:05