Of the 18 month wake up call

The irony of writing a post about how I find the time to do stuff and then not finding time to write a blog for about two weeks is not lost on me. Things have been crazy busy recently, for reasons I'm about to explain, so I'm writing this while watching Eurovision - which would be nothing without the accompanying Twitter feed, thank you ladies and gentleman for keeping me amused! 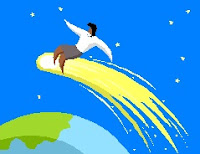 So, as Germany's entry is bleating his way out of his beanie hat, let me explain what's going on for me. I am experiencing, what I'm now labelling 'The 18 month wake up call'. My hunch is that this happens for a lot of people, but certainly for me, at some point, soon after my kids hit about 18 months old - and always before they're two -  its like I wake up. I suddenly notice the world again, and not only do I realise there is more to life than just being Mum, I want a part of it. Is it hormones? Does anyone know? Whatever it is, it always has a major impact on my life.


Inevitably this usually starts with a man, in some way shape or form. When DS1 hit this age, I engaged in a mainly virtual fling (i.e. conducted mostly through Messenger late at night!) with an ex who I hadn't even spoken to for about seven years. It was exactly what I needed and he was amazingly supportive in his own unique way, as I was also going through the worst of the crap from DS1's dad at the time. There are times when you just need somebody who really knows you and just loves you for being you and he will always be that person for me. Sadly we are so incompatible in every possible way that we are never going to be together, but I still love him, and it still makes me smile when I run into him online every now and again.

Of course, in DS2's case it has been Crush - who I am keeping at a much safer distance. Although I will admit to already being far too excited about going to his gig next Wednesday!

What's interesting for me though, is that while it always starts with a man, it doesn't end there. My crush on Crush, has obviously had me listening to his album over and over and over (thank god he's not shit), but it has also made me go back to playing lots of other music I love. (Jedward, who are currently sparkling all over the screen, are never going to be in that category). I have even got out all my old CDs to put on to the I-pod. An I-pod which, incidentally, I got as a present to myself the last time I went through this phase, on the suggestion of the aforementioned wonderful ex.

I also start noticing men in general again, not just the one I get obsessed with. For the last two years men may as well have not existed, for all the attention I've paid them. Now, apparently they are everywhere - who knew? - and I notice them. I notice the dads at swimming, I notice my guitar teacher - who, btw, looked sooo fit the other day - and we all know what I'm like for men that play guitar!

Needless to say all these men are very married and therefore totally unavailable, so there is no point noticing them, but it's the fact that I do that makes me think this phase must be hormonal. It makes evolutionary sense, don't you think?  Once you've managed to raise a child old enough to walk and talk, your body tells you to go and find someone to create another one with! Fun as the creating part would be (as I remember, it's been a while!) I think I'll stick to having kids my way - as I've said many times before, I just don't think I'm cut out for bringing up kids in a relationship - and sex is not a good enough reason to inflict my terrible taste in men on my children!

Quite apart from opening up the worlds of music and men to me,  the '18 month wake up call' is also when work usually takes off as well. I work from home, but to be honest, before the kids hit this age, I really just take what work comes - so I'm more SAHM than WAHM. At about 18 months though, I tend to step up the networking and actually go out looking for work, which is currently paying off with the potential for a really big project over the next three months. Yes, just what I need, working loads through the school summer holidays - what a logistical nightmare in childcare that will be! Still, we need the money and it's interesting work - and I've got to do something for me.

In the end, I guess that is what this wake up call is about: doing something for me. I spend my life putting the kids first, and I'm rubbish at thinking about my own needs. So I guess it's nice that when the kids hit this age, something in me takes over and puts me first, without me even trying. It is strange - not half as strange as the Eurovision recap blaring out at me from the TV like a schizophrenic Spanish disco - but it is also a lot of fun, and right now I'm enjoying the ride. I promise to keep you updated on where it takes me!

I'd really like to know though, have you experienced this? Was there a time after your kids were born when you woke up to being you again? And, on a Eurovision note, WTF was the point of that interval act?