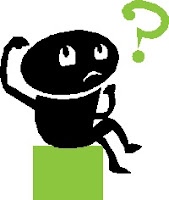 Right, readers, I need your opinion - I'm going to give you the Crush 2.0 update, and I need to know in your experience, do these seem like the actions of someone a/interested in me? or b/just being friendly?

It was all so much easier with Crush the First, it was absolutely, definitely a one way thing: I liked him, he barely noticed my existence. You know where you stand with that.
Crush 2.0 is a whole different ball game. He actually interacts with me and takes an interest and has a laugh with me. This is a whole lot less safe than my crush on Crush the First, which I knew was going nowhere. If Crush 2.0 is interested and not just being friendly, then here's a man that I seem to have a lot in common with, I really click with, I have a laugh with and I think is FAF. That, scarily, sounds like a relationship that might, actually, dare I say it.... work? Aaaarrrgghhh!!! (That'll be the sound of me running terrified for the hills)
This is why I need your expertise, if this is going to happen, might as well start facing my fears in advance - they might take a while to get over!

So is it
a/oh yes he really does fancy you ATOmum or
b/get over yourself woman.

Voting comments open at the end of this post....

Here are the facts:

Fact 1: Turning up where he knew I'd be and he didn't usually go:
After my last post about Crush 2.0,  he happened to turn up at an Open Mic night I was playing at. You wouldn't think it strange a guitarist turning up at an open mic night but:
a/ he never goes there and didn't come to play,
b/ his friends were really surprised to see him and
c/ he knew I was going to be there because I'd posted it on FB.
Clearly the combination of these things set me thinking that maybe, just maybe, he wanted to see me. He came over and said hello and asked about my voice, then wondered off outside to sit where he could smoke. I decided to go and join him and his friends after I'd played my set - check out me and my courageous moves! His friends were lovely -  warm, supportive and just a little crazy, so I had a great night. Crush 2.0 was quite quiet that night thinking back to it, but just as gorgeous and fit as ever, so needless to say, my crush was not diminished in the slightest.

Fact 2: The Facebook banter:
After that night there followed much banter via Facebook comment between us, mostly about his cure suggestions for my still lost voice. He could've just been being friendly, but he didn't seem to have that kind of banter with anyone else (not that I'm monitoring his every interaction on FB at all, oh no, not me.... and he's liked stuff I've written on other people's walls, so I reckon there's a bit of mutual monitoring going on!) The banter is not obviously flirty though, but it is definitely quite playful - but then given that it's all public, so all his friends can see it, it's not going to be flirty is it? Oh I don't know. It has got to the point now though that rarely does a day go by without some FB commenting passing between us - to be honest, I get a bit sad if there isn't, this is how hooked I am.

Fact 3: Open Mic night the third:
I went to the Open Mic he runs last Thursday. It was pretty busy so I didn't get to talk to him much before/during. He did, however, come up close behind me when I was watching one of his friends and said 'Enjoying it?'. Well, I say 'said', growled is probably more accurate - he seriously has the sexiest voice on the planet, singing or speaking. I can't remember what I replied but I was thinking 'Yeah, it's good, but if you just stay right there and keep talking to me just like that, I'm going to be enjoying it a whole lot more'. Sadly he didn't stay long. He was really sweet during my set though, sang along with the ones he knew and shouted 'It's me' to my new song which opens with some lines about a guy playing a guitar in a bar. Of course, it is about him, but I just laughed it off and hoped he didn't listen too closely to the rest of it - there's a girl that wants the guitarist - where could I have got the inspiration from? He went out for a fag so I think I got away with that one.

Fact 4: The conversation by the car:
One of his mates announced that Crush 2.0 had some CDs of his music for sale in the car. He was delightfully shy about it - think I fell for him just a bit more at that moment. By the end of the night most people had forgotten, but not me - no one with any sense would miss out on the opportunity to have that voice on tap 24/7 - so I went over and asked him for one. I am very proud to be officially the first person to buy his CD, ever. He's signed it to say so. It says "First purchaser! Love Crush 2.0 x". You can imagine that this is now my prized possession - 'love' and a kiss!!! (and if he ever becomes famous that'll be worth a mint!!). I ended up having a reasonably long chat with him at his car, oh how happy I was. He was asking about my work (he's liked my FB work page) and saying he really liked one of my songs. He was chatting a bit about himself too and saying he'd be interested to know what I thought of his CD, because I don't know his stuff at all. Then he was telling me how he did all the sound engineering and production on it, and how he's been studying this stuff for the last seven years which is why he hasn't been out gigging.  Is it just me or does that really sound like someone trying to impress me? At the time he just seemed quite intense, but in retrospect I think he was actually a bit nervous. He told me I should listen to the CD on the way home in the car and let him know what I thought - and who I was I to refuse?

Fact 5: One sexy CD and more FB banter:
The CD, is pure brilliance - got to say, not what I expected at all. You get a CD of most one-man-and-his-guitar singer-songwriter types and you get pretty much what you expect - earnest, guitary stuff with maybe a bass and drums. That's pretty much where Crush the First stuff's is at - it's brilliantly done and the songwriting's great, but it's still that kind of sound.  What you don't expect, and you get from Crush 2.0 is some of the funkiest, sexiest stuff you've ever heard - somewhere between Prince and Fun Loving Criminals - it is achingly cool, surprisingly commercial and brilliant. And, he plays every instrument on it - seven years clearly well spent there then. I wish I could post a sample of it without revealing his or my identity (really not possible), but you'll just have to trust me that his voice on the opening 8 bars of the first track is so hot, I could listen to it and entirely dispense with foreplay. I try not to play it in the car too often.
I was so impressed I wrote a somewhat overenthusiastic comment on his wall about it - well he did ask what I thought! - and then hugely regretted it then next morning when I realised he'd been online and ignored it. Thought I'd blown it then completely, so, did a quick backtrack with a humourous comment after it - blaming the night cap when I got home and my overtiredness. He liked this and commented back. Another one I got away with, perhaps shouldn't keep chancing my luck, anyway...

Fact 6: Open mic night the fourth:
Last night I got a babysitter and went out to the other Open Mic night he runs. To do so, I left my kids - one of whom was a bit ill - in the care of someone that they and I had only met that afternoon. I am clearly a bad mother. In my defence she's a qualified teacher and childminder and we have mutual friends who'd told me they'd happily leave their kids with her - and she recognised me from around town. I'm overjustifying here I know, mainly to assuage my guilt. Not guilty enough to stay in though.
I got there late because I'd waited until the kids were asleep but Crush 2.0 was outside the door, so got to chat to him straight away, and that's pretty much how I spent most of the rest of the night inbetween acts, just chatting at the door with him and whoever else came out.  I got the sense he wanted to be around me too, not in an over the top way, he was just there when I was, a lot. He remembered the stuff we'd talked about the other night and asked me about it, and gave me some advice about my set and we had a laugh. It seemed like he relaxed with me a bit more than he has up until now, which was really lovely. You know when you meet someone that you just feel like you can be yourself with - it was like that last night. He is sooo cool, but underneath that he seems like a genuninely nice bloke. Which, if you've read my previous post comparing the Crushes, was not my first impression. We were pretty much the last two there and he got me to wait until some creepy bloke (who he said had latched onto one girl that'd come down there to play last time) had gone. "I'm just being a bit protective, I'm like that sometimes" he said. He can protect me anytime he likes.

And those are pretty much the facts - with an additional bit of FB commenting back and forth today.

So, here are your voting options
A - he's definitely interested
B - he's just being friendly
C - haven't got a clue (I'm voting C)

If you would be so kind as to put the appropriate letter as a comment underneath this post - and any explanation you care to offer, I would greatly appreciate it. You may even save me from making a complete arse of myself. Looking forward nervously to hearing what you think....