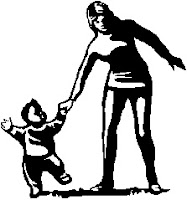 
Most single mums I've spoken to who have to deal with a difficult ex, think that they and their children would be better off without them - but we're all far too aware of the court system and society's views on how important dads are to even suggest it. This is despite the fact that (contrary to father's rights groups propaganda) there is no research evidence for the need for contact with a father - contact only has a positive effect on the child if it supports, rather than disrupts, their needs. Well, there's a surprise, it takes more than a biological fact to make you a good parent, you actually have to do something and consider your child's needs over your desire to see them - who knew?!

People often think that kids going to their dad's gives the mums a break, which it might do in an amicable split. (Which to be perfectly honest, I've never really understood - if you get on that well, why split up??)  In my experience though, when DS1 was little, most of the times he was with his dad I spent dealing with the emotional and practical fallout of his dad's latest actions. With DS2, I don't get a break unless I pay the childminder for it - or there is a particularly interesting car he's playing with or episode of Strictly on -  but I don't have all that stuff to deal with, so I have far less need of it.

Even where the dads are reliable and have regular contact, a lot of kids - DS1 included - really struggle with the transition between parents and the going backwards and forwards between houses every other weekend. Actually, its the regularity of it that's the problem, its relentless - I mean imagine a kid with two parents in the same house doing that:
"Right, this weekend, you have to do everything with Daddy and then next weekend everything has to be with Mummy and its going to be like that every weekend until you're a grown up".
It would be just as weird for that child as it is for the children of separated parents.

I always think that with 'together parents', a child's first thought on a Saturday morning might be 'what am I doing this weekend?', whereas children of separated parents wake up and think 'who am I with?' Where all the parents (even if there's only one) are in one home there doesn't seem to be the obsession about the parental relationship with the children that comes to dominate in most separated parenting.

The other difficulty is that it's usually the mums, or whoever is the 'everyday parent', that has to deal with the fallout of the disruption - the tantrums, the tears, the bad behaviour - because that's where the child feels safe to 'let it out'. More than that, the 'weekend' parent rarely believes there's a problem because the kid doesn't do it when they're there - they just go along with all the fun and excitement that weekends with dads so often involve. Who wouldn't? Seriously, given the choice between sheer escapism and broaching a difficult subject with someone who may never have discussed your feelings with you, what adult - let alone child - wouldn't choose the escapism?

I'll admit, I am not the best judge of this. Looking back over my relationships now, with the wisdom of hindsight and a couple of years of counselling, I don't think I'd call any of them good, so I don't really know a good relationship from the inside. From the outside though, most of my friends with kids have partners or husbands, and all their relationships I think most people would describe as pretty good. The thing is, when I hear them talk about their lives, it seems like, for all bar a couple of them, they're actually having to deal with more than I do, either practically or emotionally.

Parenting alone means I don't have to cook, clean, wash or shop for anyone but my children - and I don't have to negotiate that with anyone, or resent anyone for not doing their share. I'm the adult, its my job and when the children are big enough they have chores too - and if they don't do their chores they can get sent to their room.

This is what I think I would struggle with most in a relationship: if my children are being unreasonable, I can send them to their rooms. I've heard you can't do that with husbands .... I'm not sure how I'd cope.

Seriously though everyone is unreasonable at times, I know I am, but having another adult's moods, problems and difficulties to deal with just feels like another thing to do. And I don't know any mum, single or otherwise, who hasn't already got far too much to do.

Don't get me wrong, I'm sure there must be amazing moments, when your partner does something kind for you, or you share something your child has done together, or getting to write your blog with less than 100 interruptions....

The thing is, it seems to me that a relationship, good or bad, is one more thing to deal with, which inevitably means more work, another thing to think about - and when you have kids, there's so little time or head space for that, so I really do admire people who take it on. The romantic in me hopes that they take it on because they love that person so much that it's worth it - the realist in me thinks that people often do it because that's 'just what you do' - I hope my romantic is right.

As for me, I'm a happy singleton for now. I was talking with a single mum friend the other day and we reckon your 50s is the time to date - kids grown up, less responsibility, less to negotiate between you and you can just concentrate on the relationship and having fun - maybe 50s are the new 20s??

So singles and non singles, what do you reckon? Would love to hear your thoughts on the up and downsides of the way you parent.
at 14:04