Of illness and my current crush

Well, since my last post I have been mostly being ill - apparently it was tonsillitis, which I don't think I've had before - apparently tonsils don't get taken out anymore so that's no fun. Having said that, I finished the antibiotics today and already I've got a sore throat again, so maybe I'll get to go through it all again - joy! Tonsillitis is just what every single mother needs: not having enough energy to even stand, agonising pain in the throat and not being able to speak - all really practical afflictions when you're on your own with two kids. At least DS1 is at home at the moment from school, so DS2 has got someone to play with. I love watching them play together - they are both now completely Thomas obsessed so they spend most of the day playing with or being trains, which usually involves DS2 saying 'Oh no! Trouble(some) Trucks!' and DS1 saying 'Quick DS2 run' and then they run frantically between the front and back door - all of 10 metres - until whatever crisis it was has been averted. And then they start all over again. It is very sweet and DS2s 'Oh no' and Fat Controller face are hilarious. 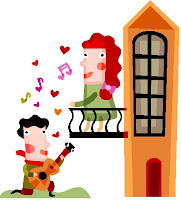 I have decided to leave them to it and have spent my convalescence indulging my crush on a local singer-songwriter. It's ages since I had a crush and I do so enjoy them - I love all the ridiculous imaginary conversations you have in your head about how your conversations with them might go. I remember once, years ago, with my then crush, I got to the point of imagining how we would react when our eldest son told us he was gay - brilliant! My brain just seems to head off on these flights of fancy without any rhyme or reason, or me having any seeming control of it at all. I just sort of sit back and watch in amusement.


Anyway, I think this crush started partly because I've always had a soft spot for guitarists, particularly the good ones - well who doesn't? - and partly because David Mitchell had the audacity to go and get engaged. As regular readers of this blog will know, I knew David at university, and a couple of years back he was my Number One Crush. This came after a couple of years of Matthew Wright holding that particular title - which is what happens if you breastfeed watching The Wright Stuff every morning - you have been warned! The crush on Mr Mitchell had waned somewhat, but he always felt like my fallback crush, so I was a little gutted when I found out he was getting married.

Never one to dwell though, I decided to get out there and cultivate a replacement, and Mr newly discovered singer-songwriter seemed perfect. You see, my criteria for a crush is that said man needs to be brilliant in some way and at least a little accessible - which is why the Matthew Wright one really didn't work: I'm not quite sure where his brilliance lies and I don't know him or know anyone that does.

Mr Singer-Songwriter however measures up to the criteria pretty well: Firstly he is a brilliant guitarist and his songs are amazing; secondly, I have seen him at the local songwriter nights I play at, and thirdly - and this is probably what started it all off - he has actually spoken to me! It is a fairly rare occurrence in my life that any man who is not related to me or anyone I know actually says words to me, so in my world, this is more than justification for a crush, in and of itself.  Admittedly, he only actually spoke three words but the three words were: 'That was awesome' about the set I'd just sung, so they are pretty good words to base a crush on - and he responded to a fan comment I left on his facebook site, but I don't think Facebook words count. God I sound like a teenager - love it!!

Anyway, there's not a lot else you can do when you're ill and can't move so I downloaded Mr SS's album and played it on repeat so I could learn all the words - fortunately the kids love it too, so it wasn't too much of a chore for them (when they did notice it between changing points and shunting engines around the living room that is). I had visions of watching Mr SS at the Open Mic night, lip syncing every word he sang, and then he'd notice me and be impressed and say hello, or ask me to sing with him, or something like that... I was a bit too knackered to develop it into a proper fantasy! Anyway, my mum put paid to that by falling down the stairs when she was on holiday so wasn't well enough to drive and couldn't babysit, so no Open Mic night romance for me - damn her and her broken ribs. (Crushes can make you callous you know).

Of course, she may have saved me from making a complete arse of myself - I suspect Mr SS is at least 10 years younger than me, and probably not even a little bit single - and crushes are really so much more fun when reality doesn't interfere with them. I have, however, written a song about my crush, which I fully intend to play at the next Open Mic night, whether Mr SS is there or not. I played it to my guitar teacher today, who loved it, but said that if I play it to a room full of singer-songwriters, they will probably all think it's about them, which could have the effect of making an entire room of people blush - which would be kind of a neat effect if I can pull it off - I'll give it a go and let you know how I get on...

In the meantime, I would love to hear about your crushes!
at 21:53