The six things life would be too hard without

I was thinking recently - when I wasn't thinking, god I hate this new blogger interface thingy (typing my first post in it and somehow it doesn't feel right) - I digress, back to the point: I was thinking recently that there are several things that I completely rely on to make my life work. Things without which life would be a lot more like wading through treacle than it is. So, I thought I'd share them with you, in no particular order: 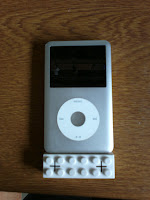 ...because you can't take the telly with you! This is my go-anywhere babysitter -  small enough to be unobtrusive to people nearby, this will keep the kids entertained in doctors waiting rooms, hairdressers, the car, anywhere where there's sod all else to do and you run the risk of bored-child-tantrums. You don't want an I-pod touch because, as I've found with my touch screen phone, DS2 is capable of getting out of his Thomas app and on to dialling 999 in the blink of an eye (sorry community support officers - but he did enjoy your visit). The I-pod Classic though, has just big enough a screen for kids to see it, and you can lock it so they can't play with anything. When DS1 was little, we used to struggle with getting ear phones in his little ears, or playing it through the car speakers, but neither was really practical. Then a couple of years ago I discovered this lego brick speaker - problem solved! I love it, it looks kind of weird but the sound is good enough so you can listen/watch to stuff on the go without having to drag around anything else. DS2 has loved watching all the Thomas episodes I downloaded all those years ago for DS. It's perfect for holidays and waiting around anywhere really -  if you don't have one, I genuinely don't know how you ever do anything outside the house. I have also been known to have it in the buggy hood playing crush's latest album, so it works for me too! - strange looks from people though as they assume I have a buggy that is wired for sound....


2. The vegetarian student by Jenny Baker 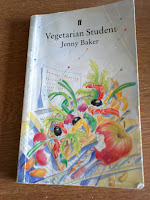 I got this second hand when I was a student - which makes it over 20 years old but I love it. I don't know how anyone has the time to weigh/measure anything, so a book with all the measurements in mugs/spoons etc. is perfect for me. I'm sure those perfectionist cooks amongst you will regale in horror at this book's lax attitude to which kind of flour/what size of mug/spoon to use, but this rough and ready approach really works for me. I have even now converted recipes in other books to volume measures - who has time to wash up scales, seriously? Also, this book has the added advantage of being aimed at students, so everything is cheap, simple and targeted at people who have not picked up a saucepan before - which is just about my level!

I love baby slings. DS2 is almost, but not quite, too big for them now, but the Babasling still goes everywhere with us just in case. It's not used but when I've needed an emergency toddler carrier it has been a lifesaver. On top of that, it also doubles as a buggy hood cover to keep the light off sleeping babies, and even a buggy blanket if you so desire. Mine also does additional service as a changing bag distinguisher, since everyone round here seems to have the free Boots one, so the large green blob of Babasling bag hanging off the side of mine means I never go home with someone else's dirty nappies - which would be so wrong in so many ways

To all you mums who have babies in another room and valiantly get up in the night whenever the little darlings are in one of their seemingly endless wakeful phases, I salute and admire you, because I genuinely couldn't do it. Night time, for me, is for lying down - as soon as I'm sitting up, let alone standing and walking to another room, I would be so awake I'd never get back to sleep, and I'd be a zombie by morning, so I couldn't really manage at all without the bedside cot. Mine has a drop side that folds completely away, so essentially its just like an extension of my bed, but importantly it's not my bed - so DS2 has his own space.  When he wakes in the night though (which is fortunately not as often as it was) I roll over, feed him and go back to sleep, as does he. I really couldn't do it any other way, I love my kids, but getting up in the night and functioning the next day is simply beyond me.

God I love ASDA, I always have, I know they're some big scary mega company, but somehow they've always seemed to me nicer than all the other big scary mega companies. I base this primarily on their Smart Price range, which I've always bought as we've never really had enough money not to. The point is that ASDA's Smart Price, does not taste like shit - and believe me, that cannot be said of all value ranges - I tried Tesco's cheap stuff once and it was disgusting - cheaper yes, but I wouldn't feed it to a dog. In my head, ASDA's Smart Price range is saying: 'Poor people deserve nice food too', it might be a complete fantasy, but I like it so I'm sticking with it.
Anyway, combine that with the fact that the nice people at ASDA will deliver a truckload of stuff to my house in a big lorry (which the boys get very excited about - there is even an 'ASDA man is coming' dance!), for a delivery cost which is less than the petrol to get there myself and I know I'm on to a winner. No dragging bored kids round supermarkets every week, and the ability to eat well no matter how broke we are - what's not to love??

and last but by no means least...

When I first became a single parent, Facebook was only just really hitting the UK, I wish more people had been on it in those first few months as I think it would've made that time of feeling so completely isolated more bearable. Now it's literally my lifeline, it's how I remember there are other people out there, its where I keep in touch with friends, renew old friendships, and just hang out really. I guess that makes me sound a bit sad, but the reality of trying to keep up with friends any other way when you're on your own with kids can be a real logistical nightmare unless they happen to live near you and have kids the same age.  I often think that being a single parent before Facebook must have been so hard, because your opportunities for adult interaction were restricted to real life - and I can go days without more than a quick hello on the school run, just because with work and the boys I'm so busy - usually too busy to arrange evenings out even if I could get a babysitter. Now, I can get a virtual dose of other adults every day, several times a day. This does mean that often my virtual life is more interesting than my real life, but at least while I have some kind of connection with other people there is a possibility that that might swap over at some point. I mean, I did just send a FB message to my current crush... you never know what might happen!!

So that's my six, what are yours?  I would really love to know so here is my first ever attempt at a Blog Hop, hope it works and - look forward to reading them...